I set out to find it. With the help of Paola’s computer and wikipedia (yes, I admit I am a wiki-phile) I found it’s latitude and with the help of Greg’s GPS and accompanied by Beth and (paradoxically) Zena, set off in my trusty Mirage along the road south to the dongas. Zena womanned the GPS.

looking for the Tropic of Capricorn, photo Beth Jackson

We eventually found the approximate spot about 500m north of the dongas and (with a peg I had prepared earlier with the latitude chiselled into it’s face and ‘L’ on the back to confuse future historians looking for the remains of Ludwig Leichardt) got out to narrow it down. After wandering back and forth a few times, we managed to locate it to within about six metres, fortuitously where a forked ironbark stood. I whanged the marker peg into the ground at the base of the tree, where it would be safe from itchy cattle. We ceremoniously and solemnly saluted it for posterity. It ran smack through the middle of Bimblebox.

Ah, there it is, photo Beth Jackson 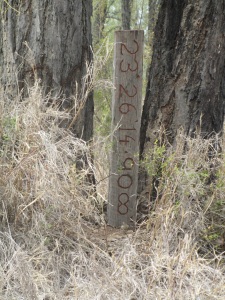 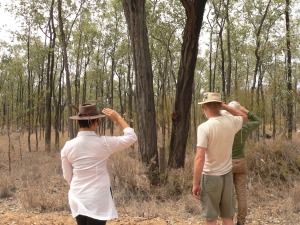 Salute to the tropic of Capricorn, photo courtesy of the artist 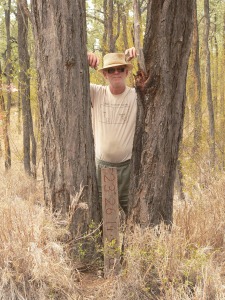 Mick standing on the Tropic of Capricorn, photo courtesy of the artist

I later calculated when the Tropic would be at the artist’s camp and carved ‘2208’ into a nearby dead tree, in the faint optimism that the tree would still be standing then, rather than trashed for the underlying darkness.

Paola and Ian are fortunate that they live in the nice cool temperate zone, but only have to travel 550m north to enjoy a warm tropical holiday. I hope they don something gay when they do.

The summer solstice in the south (the day that the sun is furthest south) is on the 21st of December, and I contacted Ian to let him know that if he stood next to the peg at local noon on that date, the sun would be directly over his head and he would be standing on his shadow.

The mine was approved on the 20th of December. Spooky. 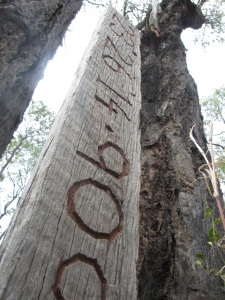 One response to “Tracking the Tropic”