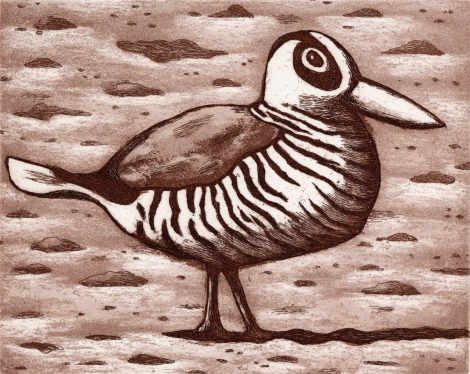 Pink-eared Duck
Poem: Out of Kilter by Joanna Lilley
Music: Pink-eared Duck by Reg Mombassa of Dog Trumpet on Fender Stratocaster through a wah wah pedal played with a metal slide.
Audio compilation and mixing by Boyd

Poem:
Out of kilter

At aeroplane height,
Australia is a black map
where pink dots apparently swirl
in pairs, yin and yanging,
gyrating water to corral
a curl of crustaceans,
algae and seeds
to filter and feed.

At plane height,
black and white stripes,
blunted bills and tails
don’t show. You have to drop
to gun height for thirteen weeks,
– unlucky for some –
to spot and kill your allotted
ten ducks a day.

Have you watched, when one
of a lifelong pair is shot,
how the other spins
the shallows alone,
too fast, perpetually off-
kiltered by the lack
of water resistance
of a matching mate.

Pink-eared Duck call description supplied to Reg Mombassa:
Flocks noisy in flight and on the water, with rapid, whistled twittering; also a sharp ‘ti-wit, ti-wit, ti-wit’ alarm call and a drawn out ‘wheeii-ooo’ in display. (Morcombe).

Reg Mombassa, artist statement for the Pink-eared Duck:
It’s obvious to me that humans have done a lot of damage to the earth, and that powerful business interests often trump protecting ecosystems that locals care about and native species depend on. My art skews towards the absurd, but I’ve always been drawn to the beauty of nature and wild places. My etching aims to capture the interesting face of the Pink-eared Duck. But also, by focusing your attention on this particular bird—I hope to make the idea of habitat and species destruction a bit less obscure, and maybe a bit more alarming.
Reg Mombassa
Extracts from an interview by Jody McDonald with Reg Mombassa, 2018.

Artist biography:
Christopher O’Doherty, also known as Reg Mombassa, is an Australian musician and artist best known for his membership in bands Mental as Anything , Dog Trumpet and The Pinks. He worked with Mambo Graphics designing T-shirts and posters since 1986 and has exhibited paintings, drawings and prints at Watters Gallery since 1975.

His diverse range of projects also includes taking part in solo and group art shows around the world. This includes a survey show at the SHErvin gallery in 2007. His   designs were featured in the Closing Ceremony of the Sydney Olympic Games in 2000 and he designed the graphics for the 2013 Sydney New Year’s Eve celebrations.

Writer biography:
Joanna Lilley‘s fourth book and debut novel, Worry Stones, was published by Ronsdale Press in 2018. Joanna is also the author of the poetry collection, If There Were Roads (Turnstone Press); the poetry collection, The Fleece Era (Brick Books), which was nominated for the Fred Cogswell Award for Excellence in Poetry; and the short story collection, The Birthday Books (Radiant Press). Joanna has an MLitt degree in creative writing from the universities of Glasgow and Strathclyde and is a Humber School for Writers graduate. She also has diplomas in plain language editing and journalism. Joanna is from the UK and now lives in Whitehorse, Yukon, Canada, where she helped to set up the Yukon Writers’ Collective Ink. She is grateful to the Kwanlin Dün First Nation and Ta’an Kwäch’än Council on whose Traditional Territories she resides.
from:  Joanna Lilley website.

Musician biography:
Reg Mombassa – as above.

© Artists, writers, photographers hold the copyright for the images, poetry, prose, artworks, text, audio files and other content on this site.

Bimblebox Art Project acknowledges the traditional custodians across Australia including the Jagalingou on whose land is the Bimblebox Nature Refuge. I pay my respects to First Nations Elders – past, present and emerging. I support the Uluru Statement From The Heart.