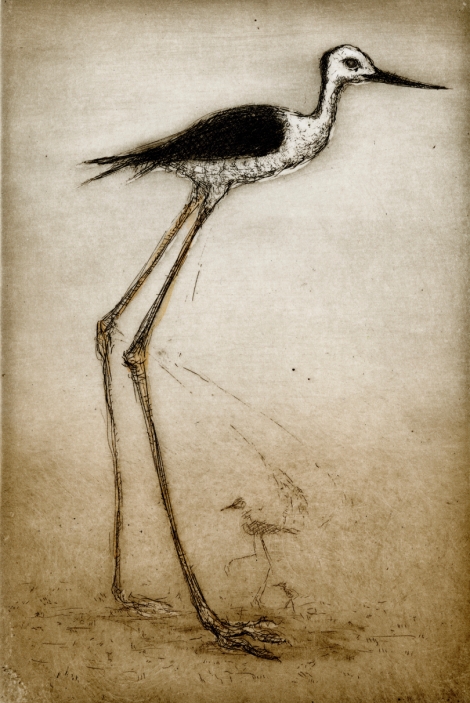 Two long, plaited, clouds of cotton-wool fog
Roll across exposed mudflats as tide runs in.
Morning sunlight bleeds an opaque water
Coloured script onto the tide– it sets loose
A word I discovered once in a poem
On Black Hawk Island: ‘condensare’.

Scatterings of black winged stilts fly in
To make a landing on the bay. They are taller
Than the early spoonbills, royal ones,
A river’s vanishing poets. The stilts slowly
Step forward, up to their bright pink knees in mud,
Spearing a crunchy breakfast as they go.

The black winged stilts keep a quick eye
On a lone human with a camera aimed at them.
Pictures dissolve, let’s say images should
Disappear, like the poetry of birds–before
We invent a language for the final entry, before
The need for a sleek soul and a slim presence.

A black winged stilt is a loaded bow,
It’s needle beak, the arrow. Lorine Niedecker
Called her writing room ‘this condensery’
And said her trade was to sit at a desk and condense.
This occurred a while back, these days poets
Learn to muddy the page and expand.

Gathering bullhead memories in a seine net
The heaviest break through the mesh.
A mangrove tree at the end of the mind is draped
With her father’s net, caught thoughts
Fade as slime dries in the sun. Minutes ago,
A line ago, the black winged stilts were wading,
Gathering spoonbill poems, yabbies, soldier crabs.

The birds have flown, taken their poems
Neatly tucked into a book, Judith Wright’s ‘Birds’?
Forget the vanishing poets. Breathe life
Into hollow bones, take heart in backwater craft.
Carry language, a mullet’s leaping joy, on your breath:
I have come to believe the black winged stilts
Carry knowledge of their particular death.

Writer Biography:
Robert Adamson was born on 17 May 1943 at Neutral Bay, and raised in Sydney, Australia. He was educated at Neutral Bay Primary School and Crows Nest Technical College. His grandfather was a fisherman on the Hawkesbury River to the north of Sydney, where Adamson has lived, on and off, for most of his life. A series of juvenile misdemeanours resulted in him being sent to various detention centres. It was during this period that he first began writing poetry.

Adamson is one of Australia’s leading poets, and is a successful writer, editor and publisher. His books have been published in the UK and the USA and his poems have been translated into several languages. He has published fifteen volumes of poetry and has organised and produced poetry readings, delivered papers, lectures and readings at literary festivals throughout Australia and internationally. He has been writer-in-residence at Australian universities, and was President of the Poetry Society of Australia, 1974-1980.  (from Robert Adamson’s website)
Read more here

Musician Biography:
Ellen Kirkwood (born Port Macquarie, Australia, 1985) is a trumpeter, composer, bandleader and educator based in Sydney. She completed a Bachelor of Music, majoring in Jazz Performance, at the Sydney Conservatorium under many Australian Jazz greats including Mike Nock, Warwick Alder, Judy Bailey, Matt McMahon and Dale Barlow. In 2012 she won the Jann Rutherford Memorial Award for young women in Jazz, including a recording at ABC Studios, project funding, and performances in Sydney and Melbourne. (from Ellen Kirkwood’s website)
Read more here.