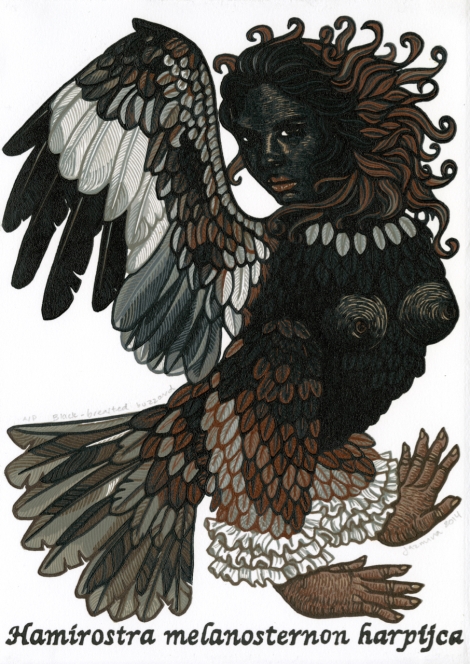 I soar on the hot thermals, the air pulsating against my huge one and a half metre wingspan, but I see nothing beneath me. I glide lower. Not so long ago, I whistled here for a mate and he called back. In my treetop nest we hatched a family and I knew that this was my kingdom. I was its queen. Along a waterway where once the mixed eucalyptus forests merged into the greener grasslands, where deep roots of silver leaf ironbark trees helped the woodlands to grew tall and strong, I hunted pale headed snakes, and nobby dragons. I ate my fill on rabbits, fat lizards, and the tasty insides of eggs of ground birds that I broke into by throwing a stone at the hard shells with my talons.

Today I whistled for a new mate.

Our time has past. The crawling machines of the humans are here.

There was no longer carrion for my family to survive on.

I rise on the thermal and turn my back to the blackness. I must seek out a new home. They call me a black-breasted buzzard. I am the eagle who used to rule the blue sky above Bimblebox Nature Refuge.

I have lost my kingdom.

And without my hunting grounds, my home.

I am lost too.

Jazmina Cininas, Artist Statement for Black-breasted Buzzard:
While “harpy” is currently a derogatory term for a clasping, bad-tempered woman, when Hesiod wrote of harpies in 700BC, he described them as beautiful fair-haired women with wings, faster than the wind or birds. The buzzard has suffered similar poor press over the years, becoming a slang term for a cantankerous person. My portrait of the Black-breasted Buzzard (which is, in fact, a type of eagle) exploits the female allusions in the bird’s name, to imagine a beautiful harpy from a time before the harpy’s reputation was tarnished, which in turn offers a more sympathetic representation of the buzzard. The spelling “harpijca” is taken from Ulisse Aldrovandi’s 17th century Monstrorum Historia which, despite being a compendium of curiosities and monstrosities, nevertheless illustrates the harpy as having a beautiful face with long flowing hair. The woodcut aesthetic borrows from a time of New World discovery, when monsters and marvels were believed to inhabit distant shores, seemingly confirmed when Australia’s singular fauna turned European expectations and understandings of biology on their head.

Artist biography:
Jazmina Cininas is a practicing visual artist, curator, arts writer and lecturer in Fine Art Printmaking. Her elaborate linocut portraits reflect a long-standing fascination with representations of female werewolves, and draw on a wide range of sources such as historical records of witch hunts and werewolf trials,  psychiatric and medical literature, fiction, folklore, cinema and the internet. Recent forays into artists’ books and lagerphones from recycled materials reflect a conscious effort to move towards a more sustainable art practice. For the record, Jazmina is not a werewolf. (from Jazmina Cininas website)
Jazmina Cininas is represented by Australian Galleries.

Musician’s biographies:
Owen Jackson
Commencing studies on the oboe at 14, Owen has accrued a multitude of musical achievements, establishing a firm foundation for his musical career. Graduating from the Queensland Conservatorium with a Bachelor of Music in Performance in 2015, Owen has been involved with numerous youth and professional orchestras. Particular highlights of his orchestral experiences have been with the Melbourne Symphony Orchestra and Queensland Symphony Orchestra, both with whom he is a casual musician; his season as Principal Cor Anglais with the Australian Youth Orchestra; and his four years with the Queensland Youth Symphony, touring internationally in 2012, and filling each position of the oboe section over the course of his time there.

Also passionate about the oboe’s solo repertoire, Owen has accrued a number of awards, including the Queensland Conservatorium’s Rudolf Pekarek prize in 2014 and 2015, and a prize from the Queensland Double Reed Society’s Open Competition in 2014.

Along with ensemble and solo performing, Owen is keenly interested in education. Having been inspired throughout the course of his degree and time at ANAM (Australian National Academy of Music) by his instrumental educators, and various guest artists, Owen hopes to be involved in education at all levels. Understanding the impact of the mentor-pupil relationship, and the importance of having passionate educators, this forms a fundamental purpose for Owen’s musical pursuit.

Nick Weaver
The Big Heart creates music with positive and spiritual themes, encouraging the search for personal truth and empowerment. The songs are contemporary and are for the head, heart & heels! Turn on, turn up and do your dance!
(from Big Heart sounds facebook page)

© Artists, writers, photographers hold the copyright for the images, poetry, prose, artworks, text, audio files and other content on this site.